We’ve seen an exciting year in SEO.  Our very own Kyle Roof went head to head with other experts in an SEO ranking competition.  He was the talk of the competition when he dominated using Lorem Ipsum text. The S.I.A. continued to expose what was scientifically needed to rank a site in Google.

The S.I.A. has continued to grow by leaps and bounds since we first began four years ago.  We now boast some of the brightest minds all working at taking the mystery out of the Google ranking algorithm.

Our members are testing exactly what Google wants, and coming up with some startling answers.

Our best SEO optimization experts are committed to ranking and helping other people rank.

We’ve chosen these SEO experts because they continue to crack the Google ranking code.

How’d you like to see our secret authority experts and resources to blow past your competition?

Today is the day that we offer you a rare peek behind the S.I.A. curtain…

We are sharing some of our absolute BEST sources with you.

Warning:  Many of these names may be new to you.  Some of theses names have risen to fame.  All are part of the secret underground elite.

In true Dori Friend style… you won’t read about Rand Fishkin or Brian Dean here.  No matter how much of a big deal Neil Patel is you won’t find him on this list either.

You WILL learn about people that you probably don’t know or may have not heard about.

These influencers are part of an SEO network that has been turning Google on it’s ear.  They are keeping one step ahead, while letting the mass SEO guessers get hit with the Google algorithm smack downs.

But today… I am going to reveal our SEO influencers…

Because you never know when or where they are going to drop their next golden nugget.

Special Mention: SEO King of the S.I.A. is Bill Hartzer – Bill Hartzer is an SEO and Domain Name Consultant, based in the Dallas, Texas area. He provides technical SEO audits to clients, as well as ongoing monthly SEO services, as well as domain name consulting services. Flipping domain names, PBNs and being quoted on some of the biggest SEO channels online, Bill is ahhhhmazing.  He hosts the super popular weekly SEO Podcast for S.I.A. members. If you aren’t a member, you’re definitely missing out on some amazing SEO and business building tactics.
www.hartzer.com
twitter @bhartzer
https://www.facebook.com/billhartzer

Clint Butler – As an Army veteran, 21 years in with three deployments to Iraq and Afghanistan, Clint learned real world applications of problem solving and adapting quickly to change. He is the Head of SEO for Over The Top SEO and owns his own agency. He is the host of SEO This Week and has co-hosted other SEO podcasts. He runs an exclusive mastermind for six and seven figure earners looking to reach the next level in their business while supporting others. Clint regularly presents at SEO Rockstars and SEO Spring Training. He has created beginner and advanced SEO and marketing courses which taught concepts based on his affiliate and adult industry experience. Clint has one of the brightest (some say devilish) minds in SEO.
https://www.overthetopseo.com/
https://www.digitaleer.com/

Ted Kubaitis – Ted Kubaitis regularly appears on the White Hat Versus Black Hat youtube show and speaks at SEO conferences such as CMSEO, DMSS, SEO Rockstars and many more. Ted has founded multiple startups and was issued a patent in web querying technology.Ted came into the S.IA. hot with some SEO Mind Bombs and he hasn’t cooled off.  Creator of the SEO software Cora, Ted is continuing to be a dominating force in the SEO world. He joins Clint and Kyle in a popular weekly Youtube series called SEOFightClub.
https://seotoollab.com
http://seofightclub.org

Jeff Lenney – Jeff Lenney is a full time Affiliate Marketer, SEO Expert & High End SEO Consultant. He lives in Orange County, CA, with his wife and 2 kids and is currently working for himself full time in order to support his wife’s Disney Habit. Jeff has become the lethal weapon with SEO and Launch Jacking that you want to know. He started an affiliate site in 2018 and shared every step of his process inside the S.I.A. and it has boomed.  Jeff is a wealth of knowledge.
https://JeffLenney.com

Bory B – Constantly testing, Bory adds a depth of information to the Skype conversation.  He isn’t afraid to ask questions and jump into conversations to share what he knows. He is a big part of the S.I.A’s underground elite and wishes to remain anonymous to the general public.

Craig Ramsay – Craig Ramsay is a digital marketing consultant based in Edinburgh, Scotland, focused on a “many hat” data driven approach to SEO for local and Ecommerce clients.Joining us in the first quarter of 2018, Craig has been a valuable asset to our Skype group discussion.  He’s always quick to jump in with tool recommendations that solve unique SEO issues.
https://www.shakedigital.com
https://www.facebook.com/ramsay.craig

Terry Power – Terry surprised us all.  He came in quietly and soon made a huge splash and became one of the guys that everyone listens to when he speaks.  As a speaker at the 2018 SEORockstars event, people really got to see the brilliance behind this great and humble man.  Since presenting at SEORockstars, Terry has been continuing hs Cloud research, developing a method of misusing some of them for increasing CTR and continued to pass on knowledge to others in the SEO community. He also has his own very popular Mastermind group where he helps people take the Ranking Factory software to the next level.
Facebook.com/GoogleGuy
https://TerrysTipsandStrategies.com

Michael Chrest  – Michael Chrest discovered his passion for internet businesses in 2002, having bought his first online business from a friend. He then began his first web design business and discovered the power of SEO. After years in the business, he decided to focus on helping other businesses grow and succeed online. Never afraid to rock the boat or inject humor, Michael offers a fresh and knowledgeable perspective on many SEO topics.
https://www.calgaryseocompany.ca

Todd Weeks – Todd Week’s passion for Mentoring, Marketing, and Storytelling has helped guide his career from Social Media Technologist to Video Production & Director, Educator, and Blogger. He currently manages growth and direction for 2Surge. Known as the man when it comes to AWS and Route53, he has helped many people who are stuck with hosting or even getting emails to inbox.  He always gives tons of value to our S.I.A. members.
https://2surge.com/
Twitter: 2surge

Chris Jeffry – Truly valued for his insight, Chris has both asked valuable questions and offered valuable answers to other’s questions.  He accidentally stumbled into SEO in 2016 and it’s officially replaced his twitter addiction. Coming from the finance and data analytics world, he brings a technical, data-driven approach to learning SEO while building a portfolio of sites. He’s your guy for any and all Excel geekery.  He’s a strong member for the S.I.A. and another member that likes to stay underground.

Make sure to look for this badge to know if you are following an SIA Influencer! 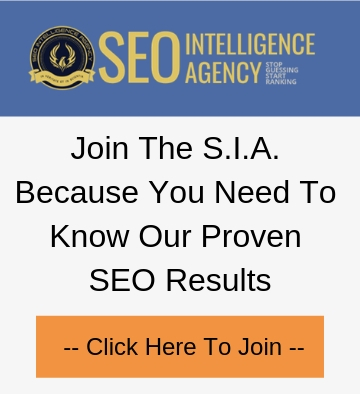